One of America's Unique Cultures


Designated by Congress in 2006, the Gullah/Geechee Cultural Heritage Corridor extends from Wilmington, N.C. in the north to Jacksonville, FL in the south. It is home to a remarkable American culture known today as Gullah/Geechee, which reaches back into the seventeenth century. This is a tradition that was first shaped by captive Africans brought to the southern United States from Central and West Africa who were forced to labor on plantations. They developed a new language with Caribbean, European, American, and African influences. Africans kept their traditions and over time reshaped those practices by incorporating elements of Southeastern culture. Geographic barriers along with a strong sense of family and community are factors that have helped to maintain Gulllah/Geechee culture. Mount Pleasant residents and visitors engage Gullah traditions on a daily basis through vivid cultural exchanges.


What is a Cultural Heritage Corridor?


The Gullah/Geechee Cultural Heritage Corridor is one of 40 congressionally designated National Heritage Areas. These areas are where natural, cultural, historic, and scenic resources combine to form a cohesive, nationally important landscape arising from patterns of human activity shaped by geography. These patterns make National Heritage Areas representative of the American experience through the physical features that remain and the traditions that have evolved in them. These regions are acknowledged by Congress for their capacity to tell important stories about our nation. The continued use of National Heritage Areas by people whose traditions helped to shape the landscape enhances their significance.


Why was the Gullah/Geechee Cultural Heritage Corridor Created?


The Gullah/Geechee Cultural Heritage Corridor was created: To recognize the important contributions made to American culture and history by Africans and African Americans known as Gullah or Geechee who settled in the coastal counties of Florida (Duval and Nassau), Georgia (Bryan, Camden, Chatham, Glynn, Liberty and McIntosh), North Carolina (Brunswick and New Hanover) and South Carolina (Beaufort, Charleston, Colleton, Georgetown, Horry, Jasper and parts of Berkeley and Dorchester); To assist Federal, State and local governments, grassroots organizations, and public and private entities in Florida, Georgia, North Carolina and South Carolina in interpreting the story of the Gullah/Geechee culture and preserving Gullah/Geechee folklore, arts, crafts, and music; and To aide in identifying and preserving sites, historical data, artifacts, and objects associated with the Gullah/Geechee culture for the benefit and education of the public.

Some content and images courtesy of U.S. National Park Service 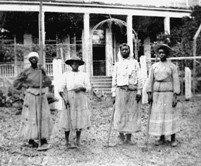 and the Gullah Tradition